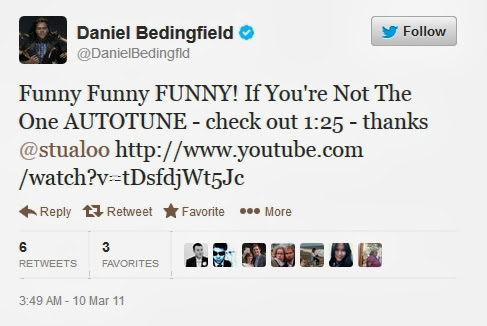 For some reason there’s been a spike in views over the last couple of days for this video. I did a Google search for the term, “Daniel Bedingfield Auto-Tune” and my video seems to be ranked at #1. I’m actually getting more views now per day than when Daniel Bedingfield himself tweeted my video in 2011. So it’s kind of a mystery.

At #2 on Google is me being judged by a blogger named Bert, I believe.

Daniel Bedingfield – If You’re Not The One (Auto-Tune) There’s a refreshing casualness here, compared to some of the earnestness that’s coming up. jeffersonkim delivers his performance slouched on an office chair, framed by a superbly messy backdrop, swivelling and fidgeting away, with the occasional builder’s sniff to punctuate Bedders’s timeless melody. Sonically, you might be put off by the trilly autotune, but the alarming stereo separation is worse, if you’re listening on headphones. As for the big note, he wins me over with a very gracious ‘refusal at the first fence’ and a long sigh instead, as though finally reaching a toilet on a busy day. 3/5

Anyway, in a little while, I’ll probably get a better idea on where all the traffic is coming from for the video and I’ll update this post. Enjoy the video. I know it’s difficult for me to endure more than a minute.